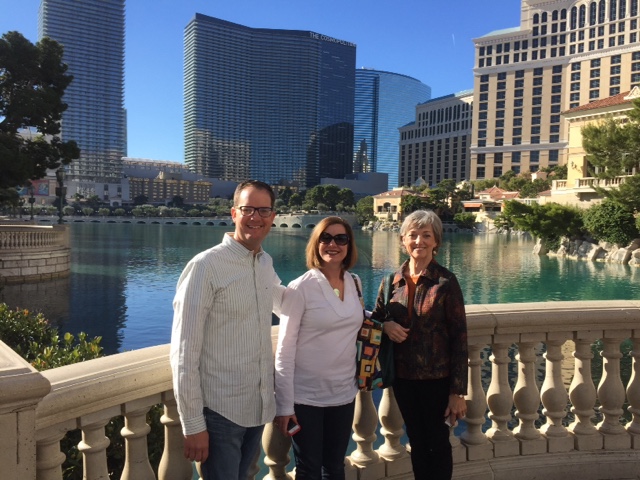 It may surprise you to know that though I have visited six continents, I had never been to Las Vegas until yesterday.  Josh attends a national conference each November, and this year's destination is none other than Sin City itself.  Since Las Vegas wasn't a trip we were likely to take without a reason, we decided to go together with my in-laws, leaving the kids behind with friends. 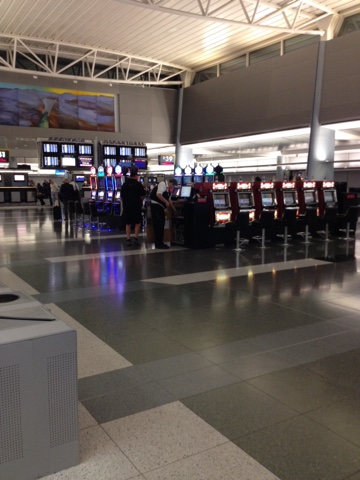 Though I'd heard that there was gambling everywhere, even in the airport, I was surprised to see slots at our gate the moment we got off the plane.  I was too concerned about meeting up with my in-laws at baggage claim to be tempted by the garish lights, so on we went, passing the welcome sign on our way. 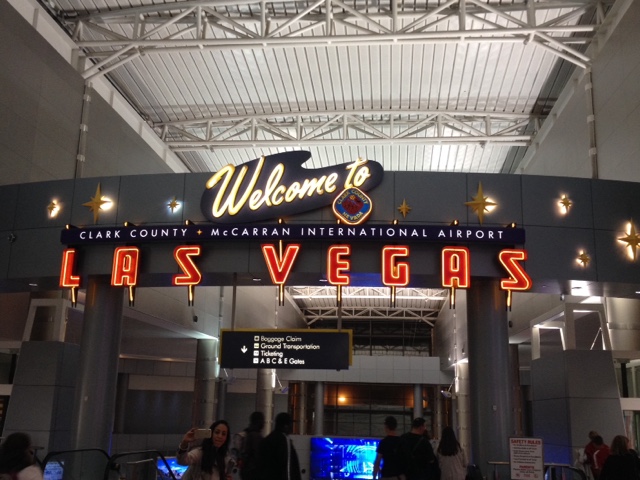 Within minutes of arriving at our hotel, The Cosmopolitan, I met a celebrity!  Scott Hamilton (1984 Olympic Men's Figure Skating gold medalist) was in line behind me when we were checking in. 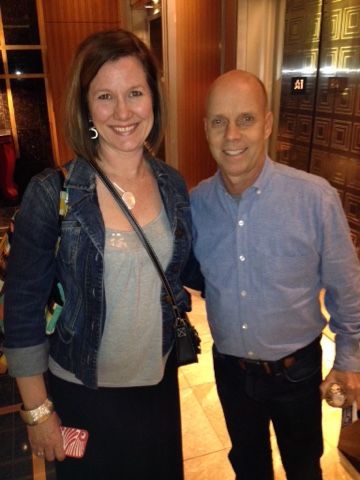 He was exactly as nice as you'd think he'd be, and he was super patient when the camera on my phone didn't work.  (Twice.)

Since Josh has gold status with Marriott's reward program (and the Cosmopolitan is part of the Marriott system), we asked for a room upgrade when we checked in.  Though none of the rooms facing the Bellagio fountains were available, we did get a huge room on the 56th floor with a vertigo-inducing balcony.  But the coolest part to me is the artsy vibe - the room has a collection of art books and colored pencils in an art glass cup just in case I feel inspired by the surrounding glam. 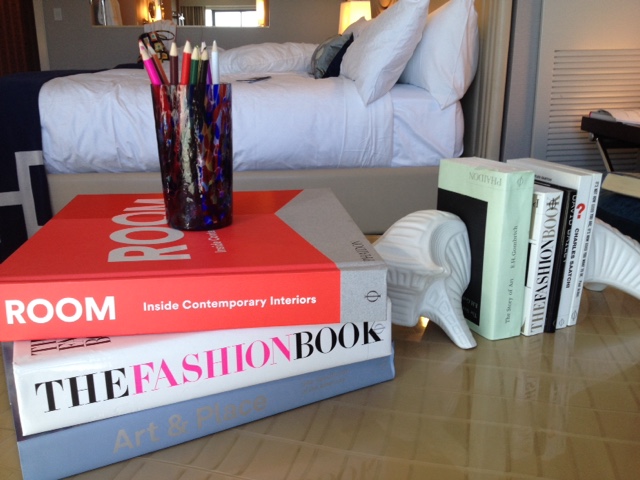 Oh Cosmo.  We only just met and you know me so well.

After unpacking, we headed to the Rio for dinner and to see Penn and Teller's magic show.  We ate at Buzios, a seafood restaurant near the entrance to the Penn and Teller Theater.  (Josh and I shared the ceviche and the shellfish pan roast, both of which were fantastic.). 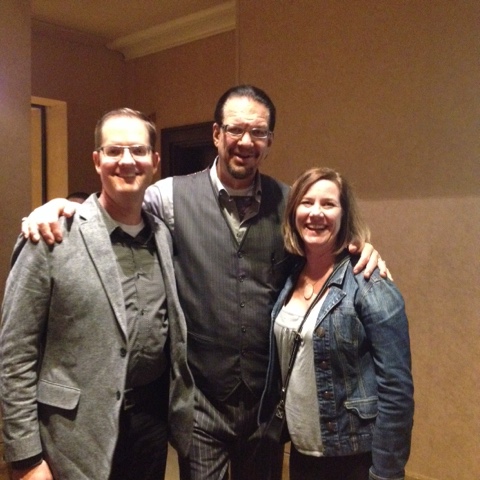 Though my favorite illusion of the show was performed by Teller, it was Penn that we met after the show.  Both performers were outside meeting fans, but Penn was far more efficient at crowd control.  Even without a real line, he worked through the hoardes of people who wanted a photo with him with an efficiency that would make a DisneyWorld character's handler jealous. 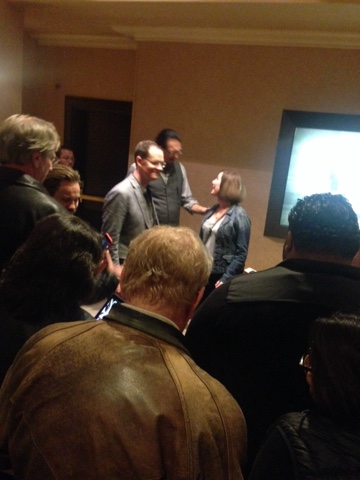 And I told him so.  I don't think anyone has ever said that to him before because he looked at me kind of funny before thanking me for what he finally assumed must have been a strange attempt at a compliment.  (It was.)

Back at The Cosmo, I decided to take advantage of the Jacuzzi tub in our room while Josh worked on his convention presentation.  I had brought a Lush bath bomb from home to use (who wants to leave a colored ring around their own tub when you could leave one around someone else's?), and I luxuriated in the scented water while trying to figure out the controls for the jets in the tub.  I pushed a couple of random buttons and finally got a satisfactory stream of bubbles.  Unfortunately, the jets were loud so I began to worry about bothering guests in neighboring rooms and ended up turning it off.

Once we were both ready to turn in, Josh starting turning off the many lamps and overhead lights in the room.  Strangely, the desk lamp wouldn't cooperate and refused to go off.  He tried, I tried, and we even tried the button by the door that was supposed to turn off everything. 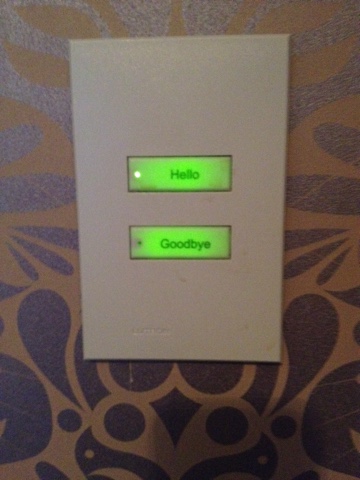 And still the desk light continued to glow.  Josh called the front desk where a girl who surely thought we were idiots told us to push the goodbye button.  When we assured her that we'd already tried that, she promised to send someone up.  A few minutes later, a maintenance guy knocked on the door and said with obvious incredulity, "Um, they said you can't turn off your desk light?"  Josh gestured to the offending illumination and moved out of the way to let the guy give it a try.  Of course, I sat across the room worrying that a simple push of a button by this guy would reveal us to be the idiots he thought we were, but I needn't have worried.  He pushed the buttons (with increasing frustration) and eventually decided new batteries were in order.  He changed the batteries on the control pad, and then turned the light off with one push.

To be sure it was fixed, he pushed the button again to turn it back on.  Nothing happened.  He tried again and again, and eventually said, "Well, the goal was to get it off, right?" Josh laughed and agreed that yes indeed, off was better than on.

The guy left and we settled into bed in the now completely dark room.  Suddenly, a horrible, thundering sound filled our ears.  We both jumped and desperately tried to turn on some lights to figure out from whence the room-rattling noise was emanating.  Lo and behold, one of those random Jacuzzi buttons I'd pressed earlier had decided to pull itself out of hibernation and work.

Josh, bless him, stumbled into the bathroom and managed to turn off the offending appliance so that we could finally get some sleep.  As I closed my eyes, I thought, "Oh, Cosmo!  I thought we really had something here - a connection, an understanding!  How could you do this to me?"

So, dear Cosmopolitan, take note.  Colored pencils and art books only get you so far. Get the kinks worked out because what happens in Vegas is going on my blog.