The Last Park of the Trip: A National Park Odyssey Days 43-44


It will surprise no one to learn that I’m a bit of a hotel snob.  I love me some high thread count sheets and kind of feel like a concierge lounge is a need rather than a want. Plop me down in a JW Marriott pretty much anywhere in the world and I’m a happy girl.  But this trip may have changed that just a bit.  It brought to light the glorious simplicity of the roadside motel. Why?  Because you can park right in front of the door of your room!!!!!  And when you’re unpacking and repacking your car every day or two for an entire summer, not having to schlep your luggage more than a few feet is HEAVEN!

(And yes, I know that there are people who never have to unpack their cars when they travel because they are avid RVers.  I am not those people.  I do not want to be responsible for washing my own towels or making my own bed while on vacation.  Now, if that RV were actually a Holland-America ship whisking me from exotic port to exotic port with a cabin boy in charge of my linens, sign me up.  I’m all about that kind of not having to unpack and repack. But I digress.)

On day 43 we packed the car—right outside our motel room door!—and then set out for the visitors’ center so that the kids could finish up their Junior Ranger booklets and earn their badges before we took off for our last park.  On our way into the park, we saw an elk in the distance, beautifully framed by the prairie grasses, the dunes, and the majestic mountains.
At the visitors’ center, the kids checked out the exhibits and finished some last-minute questions before being sworn in.

From there, it was a 3 ½ hour drive to Denver where we had planned to meet up with Josh’s cousin, Beth and her family.  We couldn’t wait to see them and hold little Roman!  The drive was long, but the payoff was big—plenty of Roman snuggles!  Knox read him a book, and then Josh and I took turns reading to him.  He was very attentive and willing to listen.  And later, at dinner, he let me carry him all around the restaurant, Casa Bonita.

Casa Bonita is not the kind of place we normally would have chosen, and Beth and Karsen certainly didn’t have it at the top of their lists.  In fact, it’s kind of corny.  The 52,000-square-foot facility seats 1,000 and entertains guests during dinner with puppet shows, a fire juggler, and a guy in a gorilla suit who dives off a 30-foot cliff into a pool below.  But we didn’t choose it for the food or for the atmosphere.  You see, Josh’s sister, Kelsey, was born in Denver.  In December of 1980, when Josh and his parents found out that a little baby girl was being placed up for adoption and could potentially join their family, they flew to Denver to meet her and bring her home.  And the day that she was placed in their arms for the first time, they celebrated with dinner at Casa Bonita.  Josh has great memories about that evening, and he wanted to share the experience with us.  And a memorable experience it was!  Plenty of cheesiness but also plenty of things to entertain a busy toddler while the rest of the group got to enjoy all-you-can-eat Mexican food.

The next morning, Karsen had to work, but Beth and Roman met us bright and early at our hotel in Longmont to join us on our visit to our 23rd and final national park of the trip—Rocky Mountain National Park.  At the visitors’ center, Josh and the kids stamped their National Parks Passports, and Beth stamped Roman’s for the first time.

The rangers told us that one parking lot in the park was already full, so we drove to the park and ride lot.  It was already full, too, so we decided to try to park at a picnic area that was near the trail to Bierstadt Lake.  We found a spot and figured out how to take a horse trail that connected to the actual Bierstadt Lake Loop Trail.  The 5.1 mile roundtrip hike had some steep-ish sections, but it was a good choice for our group.  Beth carried Roman in a baby backpack, so the rest of us couldn’t complain about the climb since we weren’t carrying an extra human on our backs.

It was the perfect time of year for wildflowers, and we saw lots of interesting varieties as we hiked.  I was desperate to see a pika, a little mammal that lives in the mountains and looks kind of like a tiny rabbit with smaller ears.  But despite keeping an eye out for one (and perhaps calling, “Here, pika pika,” off and on a few times), I had no luck.  Along the way we did see a group of park interns who were hard at work on trail maintenance, but otherwise the trail was relatively empty. The view at the end was lovely, and we enjoyed watching Roman explore his surroundings when he got out of the backpack.  The lake was calm and reflected the majesty of the surrounding snow-covered peaks.


Back at the visitors’ center, the kids got sworn in as Junior Rangers, and then we grabbed something to eat in Estes Park at Smokin’ Dave’s Barbecue before heading back to our hotel in Longmont.  One day certainly isn’t enough to completely explore Rocky Mountain National Park, so we’ll have to make a return trip someday.  Getting to introduce Roman to the joys of collecting National Parks passport stamps and share a part of our journey with family that we love made this park particularly special.  It might have been our last park of the trip, but it certainly won’t be the last stamp in our passports.

How 10 Yuan Helped Me Survive Roarin' Rapids at Shanghai Disneyland 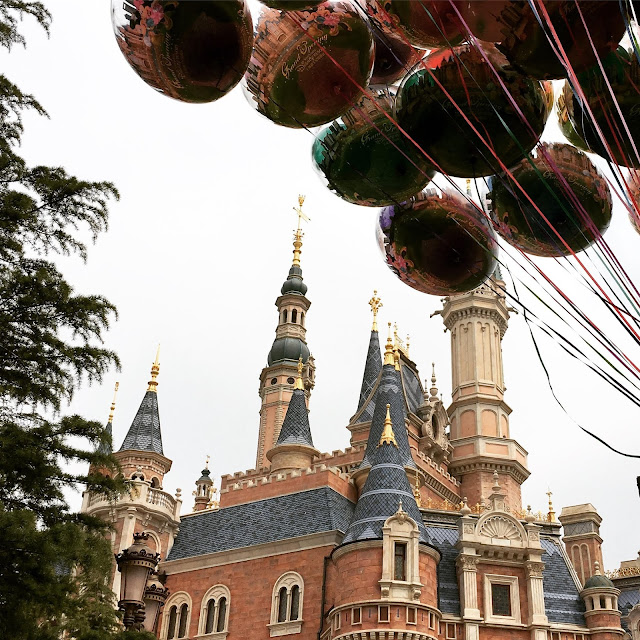 On our second day at Shanghai Disneyland, Kinley really wanted to do Roarin' Rapids.  It wasn't a warm day (in fact, Josh wore his down coat most of the day), and I didn't really want to get wet on a cold day when I wasn't sure we'd dry out.  But Kinley made the point that we might never come back, and besides, she and Josh had gotten FastPasses for the ride early in the day.  Our FastPass time had arrived, so Kinley campaigned hard to convince us to do it.I could see her point about this possibly being a one-time trip, so we headed to Adventure Isle to ride it.

It was still chilly, and I was none too thrilled, but we got in the queue for a locker so that at least our stuff wouldn't get soaked.  There were four or five people in front of us for a locker, so we waited.  And waited,  And waited.  For some reason, the kiosk that assigned lockers wasn't working.Just when we were about to give up, the line started moving, and we crammed in our stuff and hustled off to the FastPass line.  By this time in the day, all of the FastPasses for Roarin' Rapids had long since been given out, so this was clearly a popular ride in spite of the cold.  But all day I had been scanning the massive crowds for evidence of dripping-wet patrons who had just finished the ride.  I wanted to get a sense of just how wet I was going to get and how long it would take to dry out.  But all day long, I hadn't seen anyone who appeared even remotely wet.  In the FastPass line, the reason for this became evident.

Everyone, and I mean everyone, wore a poncho.  There were actually people - not Disney employees, just random people - selling ponchos in the line for 10 Yuan each.  Mystery solved.  But I wasn't sure I wanted to encourage these people by buying from them.  I mean, this behavior would not be tolerated at any other Disney property in the world, so I didn't really want to participate in this particular entrepreneurship exercise.  We talked about it as a family, and stood in line for maybe 15 minutes hemming and hawing back and forth - should we or shouldn't we?  The longer we stood, the chillier it got.  And in line, we could see the people on the ride getting drenched with water, saved from sogginess only by their cheap Chinese ponchos.

But, still, it bugged me.I mean, this wasn't the only example of random people selling things at Shanghai Disneyland.  As I mentioned in a previous post, there are guys scalping tickets every morning outside the guys without even trying to hide it.  There are people selling knock-off Minnie and Mickey ears or other little doodads in the queues for attractions.  There are even people selling FastPasses to high-demand attractions!  (This explains why the FastPass lines are so long in the morning and why people get in line for FastPasses in the morning at all when they could just jump on the ride right then when the line is minimal.)  Here's an entire post from another blogger about the phenomenon.

So we caved.  Josh went back in the line and bought four ponchos.  We sheepishly put them on and continued to wait.  We were in sight of the boarding area when the ride broke down.

I can't express to you how annoyed I was.  Here I was, using a precious FastPass on a ride I really didn't want to do, waiting a half an hour in the FastPass line (which is usually less than 15 minutes), preparing to get wet, and then compromising my principles to buy a flimsy piece of plastic from a Communist opportunist only to be told the ride was broken.  Ugh.  We exited the ride and were given FastPasses for later.

You may think this isn't a bad deal, but here's the thing.  We had burned a FastPass to do this ride.  And now EVERY SINGLE PERSON IN LINE was being given a FastPass for later. Not just the people in the FastPass line to start with, but EVERYONE.  That meant that all of these people would be in the FastPass line later making our next wait even longer.  For a ride I didn't want to do.

What to do to make myself feel better?  TRON.  Definitely TRON.  Off we went.  And it worked.  Gosh, I love that ride.  Feeling significantly better after TRON, we checked the app to see if Roarin' Rapids was open again.  I certainly didn't want to wait to do it after the sun was down since then there would be no chance of drying out.  The app indicated that the ride was operational again, so back to Adventure Isle we went.

Sure enough, the FastPass line was exceptionally long because of all of those people who got freebies when it broke down.  But we got into the line anyway with our ponchos prepared.  But this time, there was an actual Disney employee with an actual name tag selling ponchos!  Go figure!